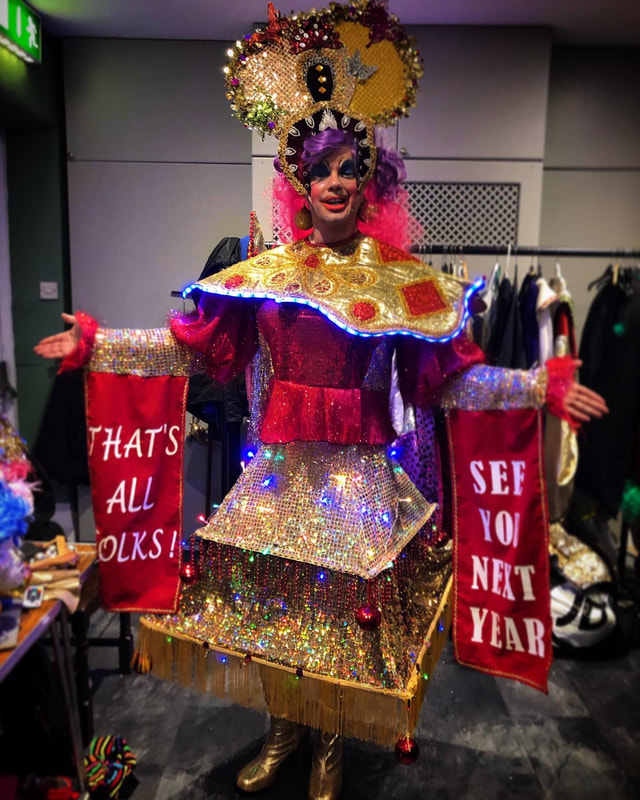 Since then, there has been an uninterrupted run of 45 pantomimes!

The Society also produces plays and musical events, ranging from Dracula to Showstoppers to The Ladykillers!

Our last "straight" plays have been really well received with challenging productions of The Accrington Pals and 1984 - check out the pages for pictures and reviews.

​Read the review from The Westmorland Gazette for The Ladykillers…

BURNESIDE Amateur Theatrical Society's three-night run of The Ladykillers comic caper opened at The Bryce last night (Thursday) and what a show it proved to be.
Graham Linehan's stage adaptation based on the Ealing comedy film of the same name is the perfect vehicle for BATS allowing the cast to up their game and giving innovative director Gordon Lawson and crew the platform to work their magic and create a superb set that practically takes on a role of its own.
And what an accomplished cast: Wayne Bartholomew playing unsuspecting Constable Macdonald; Adam Carruthers in the spotlight as dark and dangerous Louis; Phil Davies takes the role of cheeky spiv Harry Robinson; Richard Warburton, who plays outstandingly oafish One Round and Martin Cash, who, for me, gives his best BATS performance yet as hilarious gentleman conman Major Courtney.
Rita Brown is fantastic as the adorable Mrs Wilberforce who rattles around in her lopsided house next to the railway and what can you say about Duncan Cramphorn? who plays Professor Marcus, leader of the criminal quintet. The Professor's flamboyant charm and silky sophistication cloak his sinister side, and playing the orchestrator of the security van heist, Duncan gives a five star performance that Alec Guinness, who starred in the original Ealing film, would have been chuffed with. He really is that good!
It was probably the most professional performance from an amateur cast I think I've seen for many a moon. Not a fluffed word, unfortunate utterance or awkward pause.
Very funny and totally convincing in every department.

Our membership consists of the young and not-so-young! And...we are always keen to encourage and recruit new members. So if you're interested...get in touch!

Membership for is £10 for Acting Members for each production. This is due payable at first rehearsal for each show. There are reduced rates for Non-Acting Members and Friends of BATS.

Over the years the Society has had a policy of ploughing any profits from productions into providing new facilities, such as lighting and sound equipment.These facilities are not only available to BATS, but to other users of the Bryce Institute in Burneside. Over the years, BATS has contributed nearly £50,000 to the on-going maintenance of the Bryce.

BATS works closely with the Management Committee of the Bryce Institute to ensure that the Institute, BURNESIDE'S VILLAGE HALL, provides marketable facilities to encourage a wide range of users to use this vital village facility.