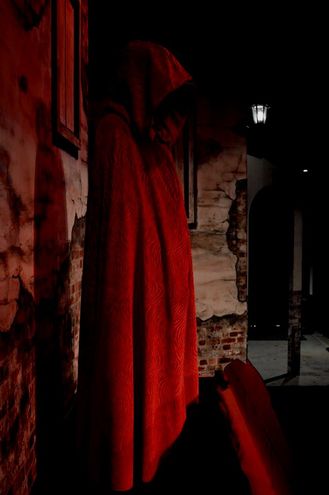 Many of her bestsellers have been successfully adapted into films, including the novels Rebecca and Jamaica Inn, and the short stories The Birds, the inspiration behind Alfred Hitchcock's film of the same name, and Don't Look Now, made in the 1970s, which starred Donald Sutherland and Julie Christie.

Continuing its tradition for staging highly ambitious and inventive theatre, the next Burneside Amateur Theatrical Society production is a stage adaptation of Don't Look Now by Nell Leyshon.


Running at The Bryce, from Wednesday, May 31 until Saturday, June 3, the classic thriller starts as a moving examination of grief but gradually becomes a chilling tale with a dark and terrifying climax.
​

It tells of Laura and John, who following the death of their young daughter, return to Venice where they spent their honeymoon years ago. Sitting across from them in a restaurant are two elderly women, identical, except one is blind. After making private jokes with John about the sisters' true nature, Laura goes over to talk to them. What she has to say to her husband after this encounter sets a chain of events in motion where the couple take it in turns to revisit their pain, while elsewhere in Venice, a series of bloody murders hints at the danger ahead.
The two BATS leads are played by talented performers Dan Taylor and Clare Walker.
Director Gordon Lawson says both have a big job in front of them, not only in learning the lines but also in conveying the emotion of the piece.
"The play depicts the fall out from the death of a child and how this is eroding the once loving relationship of John and Laura," explains Gordon. "Dan and Clare have to display some deep emotions, both in their anger over their relationship and the loss that they both feel, but which the character of John is unable to articulate or display. Both are rising to the challenge."
A heady mix of emotion and mystery, that comes to a shattering conclusion on the banks of a Venice canal, the play boasts a great cast, including Sue Cook and Rita Brown as two sisters who give Laura a mysterious message, and BATS stalwarts Martin Cash and Ron Milnes in supporting roles, skilfully supported by BATS newcomers, Wayne Bartholomew and Thomas Miles.
Meanwhile, in the background is a red cloaked figure who haunts John's consciousness - is it real or in his imagination?