Welcome to the Treasure Island page.... 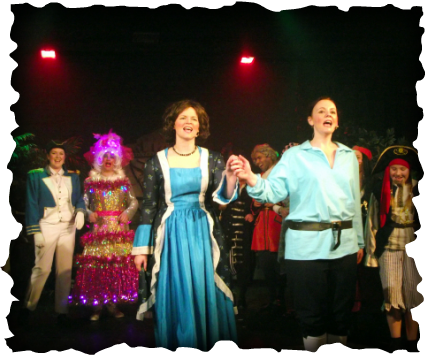 Fortunately, BATS veteran Gordon Lawson has a wealth of experience to draw on and is adept at orchestrating chaos. His slick and inventive take on Treasure Island went down a storm with the matinee audience at The Bryce.

We were introduced to the story by Ron Milnes’ Billy Skillet narrating Red Rum’s (Sue Cook) story over a projected montage - a clever technique of getting a sense of story over to a young audience without losing them...and before long, Adam Carruthers gamely stepped up to the oversize bra of dame Scantillick Ladd (say it out loud….there you go) and quite literally threw himself into a deceptively difficult role with his madcap, energetic performance, ad libs “Lucky charm” and facial tics.

Louise Bell followed up her impressive 1984 BATS debut with a laudable, Captain Smellit and hamming up a scratched finger as the brilliantly named, Doctor Liversausage was Zaeed Mohammed.

Helen Townson channelled her inner Mrs Overall with her turn as Brenn Gunn and Martin Cash delved into his expanding bag of bumbling toffs and came up with a purple faced Squire, prone to mood swings, what,what, what!

The always brilliant band of BATS juniors enjoyed their roles as pirates and were ably choreographed in the fun dance routines by Helen Fothergill whose neon UV lit skeleton dance number was particularly effective.

The stand out though was John Dodds in the role of Long John Silver, delivering a performance that was almost too good for pantomime. Garth-ing and Argh-ing for all he was worth with pithy come backs to the audiences jeers such as “I’ve had more boos at my AA meetings” soaring over the heads of the younger audience members, but landing nicely with those accompanying them.

Such is the repeatedly high standard of BATS costumiers Fran Milnes and Liz Archer that their work is often overlooked. Once again their designs (most of which are handmade with only specialist items bought in) made the eyes pop.

It would be remiss not to mention the incredible sets, expertly lit by Joe Hacker, built by the director himself and lovingly painted and dressed by Stewart Williams, Allyson Harkness and Sue Cook. They would not have looked out of place on any West End stage. The attention to detail was extraordinary, in particular the ramshackle Admiral Bimbo Inn which looked like it could have fallen down at any moment and Treasure Island itself, a dense undergrowth coupled with a backlit waterfall projection (courtesy of Effects Designer; Nigel Crook) which was incredibly striking.

The pace never lagged, even with some tricky scene changes to negotiate, proving once again that BATS not only have a strong team in front of the curtain, but behind it too. 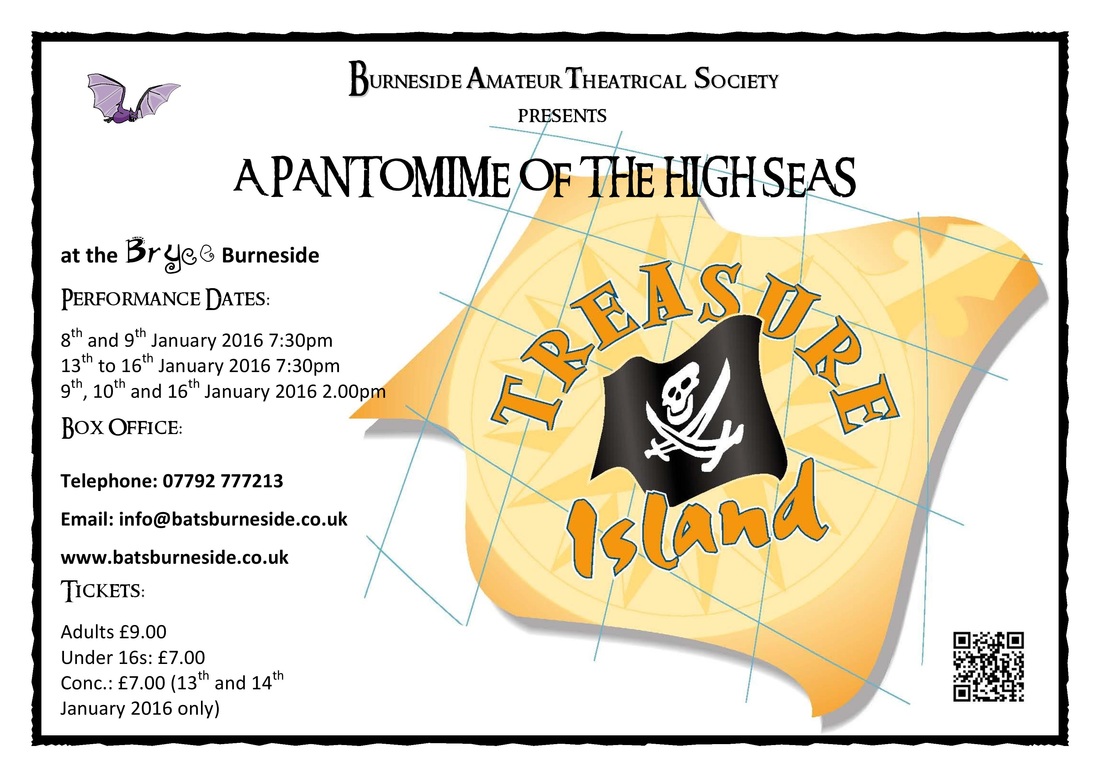 Avast behind, shipmates! And stand by to go about for a hugely successful pantomime version of everybody’s favourite swashbuckling classic.

Treasure Island, The Panto brings you all the very best of traditional pantomime and misses absolutely no opportunity to press-gang the audience right into the thick of the seafaring action!

And all this played out against the glorious backdrop of the high seas, where the heroic derring-do of unfeasibly good looking goodies is pitted against the fiendish skullduggery of unbelievably gruesome baddies. From eye-patches and treasure chests, to poop decks and peg-legs. Some poor unfortunates even get forced to walk the plank ...!

Jim Ladd (the youthful hero of our seafaring yarn) stumbles across a mysterious map, showing the whereabouts of the buried treasure of infamous pirate captain, Captain Red Rum. In the company of Mrs. Skantillick Ladd (Jim’s mother and indomitable pantomime dame), the Squire, Doctor Liversausage, and Captain Smellit, Jim sets out to recover the treasure. Yet he is blissfully unaware that the vessel they embark on is run by none other than Red Rum's old gang, led by the rascally, one-legged Long John Silver! 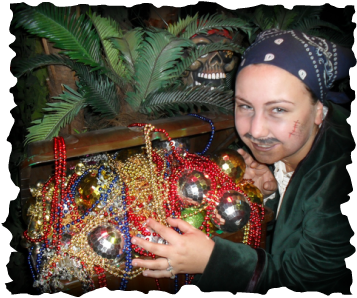 Elisha has grown up doing BATS pantomimes and this year sees her second stab at Treasure Island...only this time as part of the adult cast...!

Well as she hit the grand age of 21 we thought it was about time!

Elisha has loved getting to grips with her character Bilge and the mastering the “pirate accent”...It’s been great fun...!

Elisha has really loved being part of the panto this year. She sees it as a really big family that has a great time. She has enjoyed working alongside some great characters and describes the whole experience as “brilliant”. 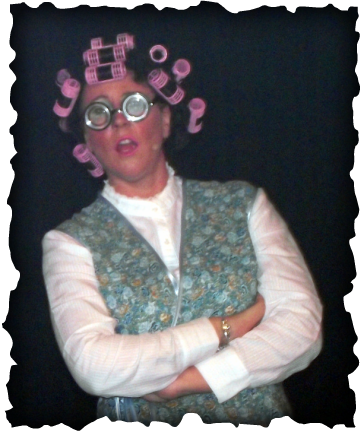 Helen has been part of BATS for some years now but this year was the first time she stepped out of her usual safe, comedy roles she has in panto and tried her hand at the serious stuff ...First, she tackled a small but difficult part in BATS production of "1984".

She then followed this in a lighter fashion in this year’s Showstoppers, which cast Helen as the dizzy air hostess ...but given that the part required a certain amount of audience participation, it was really a dress rehearsal for...

...when she was asked to take on the role of Bren Gunn, a somewhat crazy tea lady in this year’s  panto, Treasure Island. 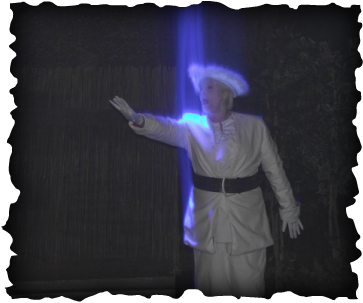 Sue joined BATS 8 years ago as a ‘one-off’ to help out with Cinderella and has never escaped!

Now on the BATS committee, Sue generally ‘fills-in’ with any part the director cares to throw at her and has been a housekeeper, wearing the same dress,  in more plays than she cares to remember!!!

Her main love, though, is singing and she devised the concept for Showstoppers – Around the World in 80 Minutes and produced it along with Liz Archer – a first for both of them.

As Captain Red Rum in this year’s panto, Sue was delighted that her lines were pre-recorded so there is no fear of her forgetting them …fabulous!!!! 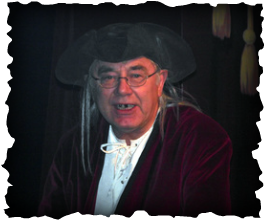 What a pleasure to welcome Ron back to the cast of Pantomime!

He has been sadly missed by the whole team and it has taken much tactical persuasion to tempt Ron back from resting his considerable talents.

All are delighted to have him back on board and relieved to be assured of another triumphant pantomime season.

After the performance, please form an orderly queue in the bar for autographs. Whisky helps to steady his hand. 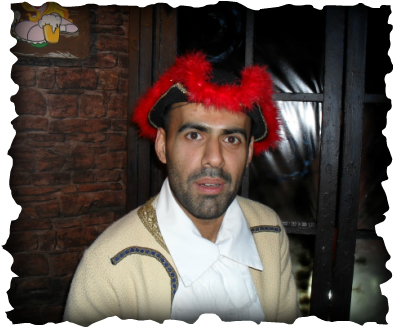 Zaeed Mohammed ~ Doctor Liversausage
This is my first BATS production.

I had heard many rumours about how good this amateur dramatics group were and am therefore pleased to join such a talented crew.

I hope the panto is enjoyed by you people watching as much I am enjoying being a part of it. 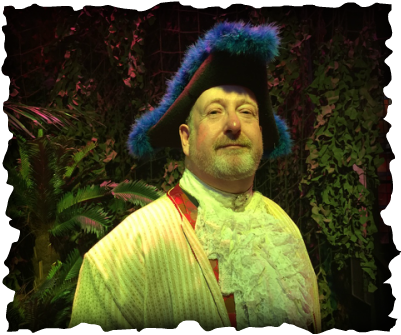 In spite of having had more farewell appearances than the Avro Vulcan and Frank Sinatra put together, Martin has still not given up treading the boards and returns for his 22nd pantomime with BATS.

The last time we did Treasure Island, he played the part of Long John Silver, but advancing years mean he can no longer get his leg up (oo-err!) and he has therefore taken on the role of a pompous upper class twit. These attributes meant he was the ideal person to play the Squire! 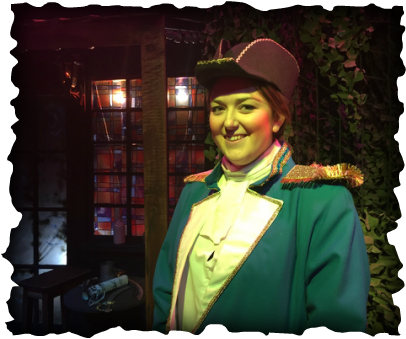 You may recognise Louise from 1984...however she hasn't aged a bit! Now fresh from her trip to Austria she's ready to don the responsibility of driving the ship.

Louise has enjoyed coming back to panto after 10 or so years, even though some of the jokes still needing explaining.

However a personal favourite: How much did the pirate pay for his hook and peg leg? An arm and a leg!

With rubbish jokes like this, let’s hope Louise can keep a straight face on stage... Fingers crossed.

Hope you enjoy the show!

Jen first joined the BATS team in the junior chorus for 'Sinbad the Sailor' 19 years ago !!!

She continued to be involved with the pantomimes for the next 8 years until taking a break after playing principal girl in 'Jack and the Beanstalk' in 2005.

She is very excited to be returning 11 years later to play the role of 'Nancy', along with her 10 year old and 7 year old daughters who are in our junior chorus.

As well as pantomime , Jen loves being in BATS’ summer musical extravaganza 'Showstoppers' and has recently become more involved in our plays by taking on some relatively small but very challenging and important characters in 'The Accrington Pals' and '1984'. 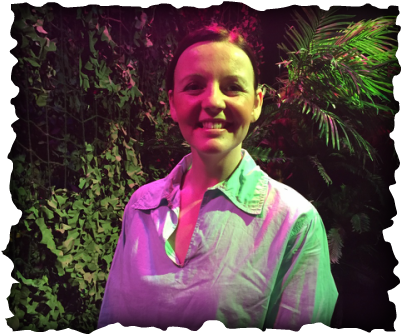 
Tracey joined BATS last year for Showstoppers and loved it so much she couldn’t wait to join in with this year’s pantomime.

She is very excited to have been cast as Jim Ladd and is looking forward to swashbuckling adventures and thigh slapping shenanigans! 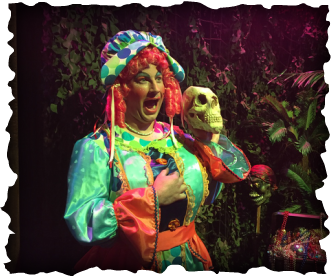 Adam Carruthers - Dame Scantillick Ladd
Adam has looked so good in a dress.... in previous pantos, that it seemed obvious he should be our Dame in this year's production!

And no surprises, there was no protesting from Adam at all!

It's been a busy few years for Adam, taking on many large roles in recent BATS productions, with some very challenging parts in  "The Accrington Pals" and "1984". Check out the website pages for a flavour...

Along side this, he's quite often popping down to the "big smoke" of London, recording with his band 'Shaft Of Steel', and also playing numerous gigs around the country - visit their website at http://shaftofsteel.com

Adam hopes that you all enjoy the show and get into the panto spirit!! 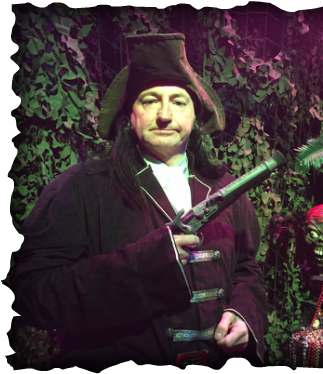 Hi, I’m here entirely for your amusement, the cast ran out of enthusiasm for my antics months ago!

I’ve been hanging around the BATS panto shadows since I don’t know when. Age will do that to you. I’ve played dwarves, giants, doctors and spacemen to name a few, all of which beat me into the shadow of my former self that you’ll see in this show.
In auditions, my Sleeping Beauty startled the world, but once they woke me up and told me who I was playing my hand was forced and I didn’t have a leg to stand on!

All performances come with a health warning - Any tunefulness in my singing voice is by complete accident, other excuses are available.

Some say this is not the first time I’ve been legless on stage, but that’s just the way things AAAAAAARRRRRRR!